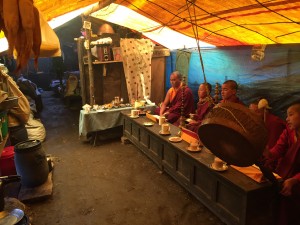 Lama Mingmar and some young monks from Taksindu monatery blessing the Ruphuti house before construction began. 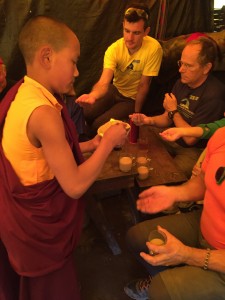 The traditional partaking of gifts at the end of the ceremony.

I found myself curled up in my tent with severe abdominal pain, and when things did not get better, our Sherpa guides called in a helicopter. I was taken to a Kathmandu hospital where doctors diagnosed me having a gallstone which was irritating and causing my gallbladder to complain. Ouch!

After a couple days in the hospital and with my conditioned improved, I flew home to see what Boulder docs had to say. They concurred with the diagnosis and, in concert with my Kathmandu surgeon, they agreed on the recommended treatment—surgical removal of both the gallstone and gallbladder. Surgery, which is a laparoscopic procedure done on an outpatient basis, will be performed Dec 7 in Boulder Community Hospital. 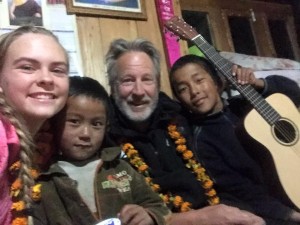 I hated to leave the project. We’d been able to accomplish much rebuilding, and I so enjoyed sharing the Sherpa life in Chhulemu with the volunteers. Edward Kean, my right hand man, had planned from the start to be with me in leading all three treks. He has taken over all aspects of the remainder of the trip and I feel confident he will be leading the rest of the project in a flawless manner. 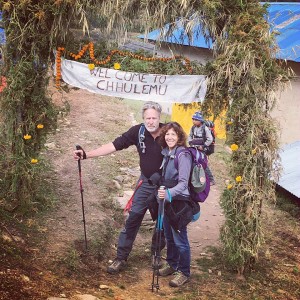 I have more blog posts to share with you when I’m feeling up to writing them, including a post recapping the status of the project when Trek #3 is completed and all have returned home. I’ve also told all the trekkers that I’d dearly love having them write their own posts to share their experiences. Many have told me the trip was life changing. So, I hope one or more of them will scratch the itch and write, telling all of you what it was like.

I’ll be back and until then—