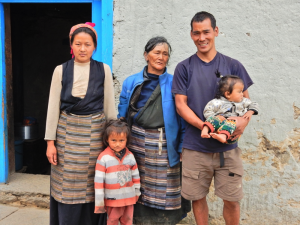 Pasang and Domi are in there 20s and live with son Nosang, daughter Dawa Jangmu, and Sarki, Pasang’s mother.

At the time of the first earthquake, Pasang was at Camp 2, guiding a group to the top of Mt. Everest.

“The quake caused massive avalanches and cut us off from the camps below,” Pasang said. There were about 100 of us together and we communicated with the outside world by satellite phone. It was too dangerous for helicopters to evacuate us, so all of us tied to a man rope worked our way down to Camp 1 and then we were evacuated by helicopters.”

Even though Domi knew her husband was at Camp 2, it wasn’t until he was back to safety that she first learned he was unharmed.

The family lived in a three story house that was so badly damaged it is unsafe to live inside it. Instead they are living in a temporary shelter made from cut tree branches for a frame and tarps stretched over them for a roof. Walls are made from woven grass mats.