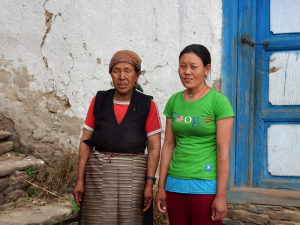 Sarki and Pasi, husband and wife, lived in a three story house with their daughter Puti, 19. Their other children, son Dawa 27, daughter Phurwa 29, and son Pemba 21, are out of the house and live elsewhere.

Their house was 3 stories and now would prefer a 1 story, 2 max, and whatever is built, it would have to be larger to provide enough room for living and storage.

Pasi was in the jungle with the family’s cattle, while Sarki was at home harvesting crops at the times of both earthquakes 1 and 2. Her husband joined her in the jungle with the cattle when the second quake hit. The family moved into a temporary shelter with two rooms—one for cooking and one for sleeping. They were quite terrified after each of the quakes, especially the third one. Their daughter, Phurwa, had come back to Chhulemu when at the time of the second quake she witnessed everything shaking and became very terrified.

The family is afraid to be inside their house, but slowly they feel life is starting to get back to normal.