In 2009 Don Moore and J.J. McMahon met on a trek in Nepal and at its conclusion stayed in the
country to do service work. Behind Afghanistan Nepal is the poorest country in Asia providing endless
options to help relieve poverty. When they came home, the two formed a 501(c)(3) charitable
organization to continue the work they started before leaving the country.

Part of the philosophy of HDF is to take on projects that have meaningful impact, measurable
results and, to the extent possible, no administrative cost. We want to be able to say with confidence to
our donors that every dollar invested goes directly to providing maximum good. To date we are proud to
say that all the projects we’ve undertaken meet those requirements.

Karma Sherpa, formerly from Chhulemu is an emigrant from Nepal and together with his wife,
Dafuti, who also emigrated from Nepal live in Superior, Colorado with their two children. Karma is the
youngest of eleven children, all but him still live in Nepal. His brother, Ngima lives in Kathmandu, but
regularly travels to Chhulemu and the surrounding area. Because of the connections to the village, we
consider Chhulemu as our ground zero of operations. Ngima provides our tactical support on the
ground. 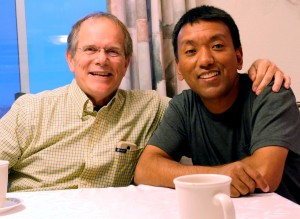 On their trek Jay and Don noticed schools that had skylights in the roofs, but none existed in the
school in the village where we stayed, Chhulemu. We asked and the headmaster of that local
elementary school agreed we could retrofit the roof with skylights. It’s a simple process. 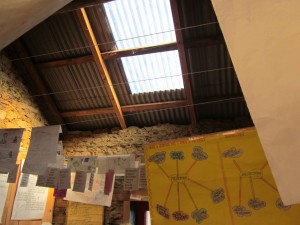 Interior of Classroom After Skylight Installation

All schools are constructed with the same basic design—rock walls and corrugated metal roofs.
By removing a panels of the corrugated metal roofs and replacing them with panels of corrugated
translucent fiberglass, each classroom is bathed in sunlight which also provides radiant heat. Students
and teachers can see better and stay warmer in colder months. From their own pockets, Don and Jay
funded the cost of retrofitting the Chhulemu school and from there launched Skylights for Schools in the
Taksindu region of Nepal.

As we hoped, word got out about our Skylights for Schools project and Ngima received multiple
solicitations for school retrofitting. He took ‘before’ pictures of each school and sent them to Karma who
forwarded them to Don and Jay. Along with the photos, Ngima sent an estimate for the costs of labor
and materials. We gave the ‘okay’ and raised the necessary funds. Ngima bought the materials, ordered
their portering in and supervise the work. He then took ‘after’ pictures, sending them back to us. We
then forwarded the funds for the costs to Karma who then wired them to Ngima for proper
disbursement. 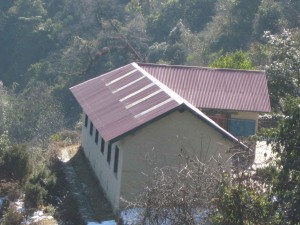 Exterior Shot of School After Skylight

The cost of materials was about $75 per skylight. With portering the materials and installation
by local carpenters, a school was retrofitted for $350-$500, depending on its size.

Once we gained experience in actually doing this project and knowing its impact, we replicated
it in 22 village schools and an orphanage. By 2013 we had covered the area Ngima could effectively
manage, and we consider this project complete.
Below are pictures of some of those schools in that area.


Don visited the village on his trek in the fall of 2013 and conducted a meeting with the villagers,
asking what HDF could do to improve their lives. Following a discussion of several different ideas they
unanimously agreed they wanted both better toileting and improved farming methods. Our mission for
both the near term (better toileting) and longer term (improved farming methods) was set.

At that time, villagers used outhouses built on the sides of hills, with human waste being
deposited directly on the ground below. Monsoon rains would wash the contaminants downhill, seeping
through the soil and eventually into the groundwater. By moving away from that toileting method, the
village could eliminate a public health risk through groundwater contamination and improve personal
hygiene at the same time.

Jay researched best practices for improved toileting in developing worlds and learned about the
EcoSan composting toilet. In a variety of different styles the system is used throughout parts of Asia,
including Nepal. The accompanying video demonstrates the basic design.

HDF hired Nepali carpenters who had built EcoSan toilets elsewhere in Nepal to come to
Chhulemu, build the first one and teach their construction to local carpenters. We also hired a social
worker to come to teach the villagers how to use the system.

There was so much demand for to be the first to receive a toilet, the villagers conducted a
lottery. Don and Jay travelled to Chhulemu in the fall of 2014 to observe the construction and talk to the
enthusiastic villagers.

The carpenters built a separate room just outside a villager’s home with rock, cement,
corrugated metal roof, and a squat receptacle. With sand hauled from a nearby river mixed with
cement and water the carpenters laid a concrete floor surrounding the molded vinyl receptacle. They
then constructed rock walls and fastened the metal roof overhead.

A small ridge diverter is built into the receptacle, containing two holes—a small one in front and
a larger one in back. Liquid waste flows into the front hole, through a small tube and empties into a
large plastic drum just outside. Solid waste drops into the larger tube and with a small quantity of water
is washed down and away.

Diluted urine from the drum can be used as fertilizer on plants immediately. The tube for the
solid waste flows into a large 7’ X 7’ dug pit, the first 5’ of which is loaded with rocks. The pit is covered,
allowing the waste to accumulate in the top five feet. The water flows from the tube and through the 5’
of rocks, and once it reaches ground water it has been purified.

That first pit is used for 6 months and thereafter the end of the pipe is moved to a second pit
built the same as the first. Once twelve months has passed the solid waste in the first pit has

decomposed into compost which then is used it the field. The large tube is moved back to the first pit
and the process is repeated every 6 months.

We thought it necessary for the homeowners to have some ‘skin in the game’ and came up with
certain requirements. In order to receive a toilet the homeowner has the responsibilities to 1. Supply
the necessary land, 2. Retrieve necessary sand from the river, 3. Gather the rocks needed, and 4. Supply
half the labor. HDF bought the remaining materials, had them portered in and hired the carpenters to
do the construction, all at a cost of $300.

The project was met with universal enthusiasm among the villagers, and we immediately began
building them new EcoSan toilets. Then came three devastating earthquakes in April, 2015.

The first of the Nepal Spring 2015 earthquakes occurred on April 25 and much of Chhulemu was
badly damaged. As far as the villagers of Chhulemu are concerned, there were actually three
earthquakes, the second of which on Tuesday May 12, 2015 worked to finish off the destruction all 28
homes. A third and milder quake followed several days later, and countless aftershocks continued for
the next many weeks. Fortunately, there was no loss of life nor were there any serious injuries in the
village. 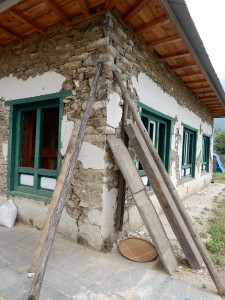 Many who’ve volunteered their time to HDF have been to Nepal and Chhulemu on several
occasions and have stayed with the villagers for many days. Together with our hosts, we shared the
same roofs, and together we drank tea, ate meals, and celebrated. They have become extended family
to us. We know and have played with their children. So, this second quake is personal to us in a very
deep way.

After the news of that first earthquake HDF’s board decided to rebuild whatever was necessary
in Chhulemu, population of more than 100.

Don traveled to Chhulemu in June of 2015, met with each household, gathered their stories and
pledged to do whatever we could. When he returned home, he and neighbor/friend Edward Kean
sought out the help of a professor of seismology engineering at Colorado State University. They met
with him, described the problem of rebuilding homes in a Sherpa mountain village in Nepal. Upon his
recommendation we called Kit Myamoto of Myamoto International: Earthquake + Structural
Engineering. Miyamoto is an organization specializing in rapid response to earthquake disasters
worldwide. By the time Don contacted Kit, his company had opened an office in Kathmandu specifically
designed to address the country’s April disaster. 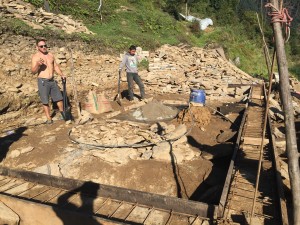 Edward and Don worked with an engineer in the company’s Kathmandu office who designed a
prototype that could be used to build new structures. Further, it would maintain the traditional Sherpa
building style and making them earthquake resistant. The worst of the homes were identified that HDF
would tear down and rebuild with that design. Remaining homes were rebuilt by other charities and
homeowners who tapped into overseas family resources.

Through direct solicitation and fundraisers HDF raised nearly $90,000 for the project. First we
paid for Miyamoto’s services, then purchased a variety of materials including rebar, cement, and roofing
materials plus battery operated portable hand tools such as planers, high impact hammer drills, circular
saws, and cutting tools, all delivered to the site. Finally, we hired a multitude of carpenters who were
supervised by an engineer from Miyamoto. 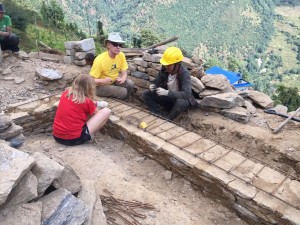 We also solicitated kind-souled people to travel to Nepal using their own funds to work as
volunteers alongside the carpenters. Beginning in November 2015 three different sets of volunteers
went to Chhulemu, slept in tents, and worked hauling rock, cutting rebar, mixing, and helping to pour
cement, and otherwise doing whatever the carpenters needed. By the middle of December when the
last group of volunteers left, we had done it!

In Nepal it’s never a question if an earthquake will happen, but rather when. The Sherpa style
homes we created were as earthquake resistant as then current technology could produce.

Following the reconstruction of Chhulemu, HDF finished building EcoSan toilets there in 2018
and started constructing them in a second nearby village. About halfway through completion in early
2019 the spread of Covid-19 brought construction to a halt, and it remained so until the middle of 2021.
Since then we’ve been able to inch forward, with final completion undetermined. One day that will
happen and HDF will respond to the call of other villages requesting better sanitation through
composting toilets.