The two houses selected to be rebuilt first are owned by widows of limited means who have children living at home. Rhiputi’s husband died eight years ago of natural causes. She has three girls, all married, and two boys living with her. Lhakpa’s husband died six years ago as a result of an accident. She has five children, two girls and three boys. We are constructing houses of one and a half stories for each of them. Edward heads up Team Rhiputi, and I Team Lhakpa. 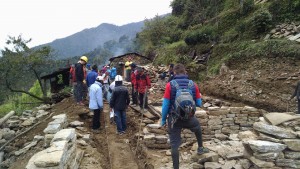 We find each site under construction by a total of 17 Sherpa carpenters. The houses have been disassembled down to the foundation, with all the blocks, door and window frames, timbers, stairs, roof, etc. stockpiled nearby. The top of the five foot deep existing rock foundation is exposed and that’s where work begins. What’s been uncovered is still below grade by 18-24”, and to it the carpenters add flat stone slabs. 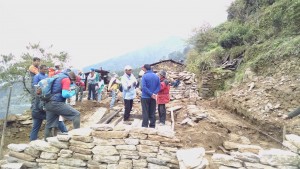 Customarily, mud mortar would be applied between the layers of rock, but our engineering firm, Miyamoto International, has specified mud mixed with cement as the first step in earthquake resistant design.

We have two primary jobs on this day, one is to crumble into a fine powder clay dug from the side of a hill. That powdered clay is then mixed with dry cement, and then water is added to make a cookie dough like paste. That mixing becomes our second job.

Then there’s hauling rocks, big rocks. We haul lots of them from point A to point B, just a few yards away, making them closer to the carpenters and handier for building walls. The crumbling is simple work—sitting in the shade and rubbing soft clods of clay between gloved hands into a rough powder. It’s kid kind of play and we have a good time. The other two jobs are more strenuous. I don’t need to say much about the workout earned from picking up large rocks and moving them around. It’s tough. Mixing dry ingredients with a shovel is also difficult, hard work, but when water is added the muscle toning/exhaustion factor is increased several times. 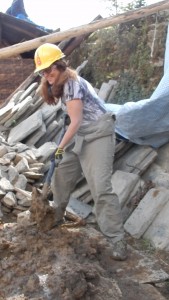